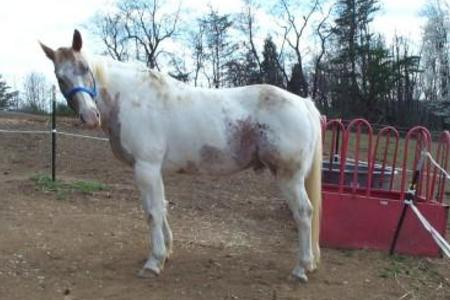 Sunshine
(18+ year old palomino pony mare)
Purchased from AC4H rescue in 2004 alongside Justin. Due to her distrust issues, I gave her to another rescue in New Freedom, PA. Where Sunshine was adopted out to Gayle in PA - went to same home as Gail, Orion, & Whiskey.

Sandtrap
(15+ year old Appaloosa mare)
Purchased from Hagerstown, MD horse auction 2007 along with Sundance. Found her a good home with Jim in MD (who loved her dearly until the end RIP 2012). 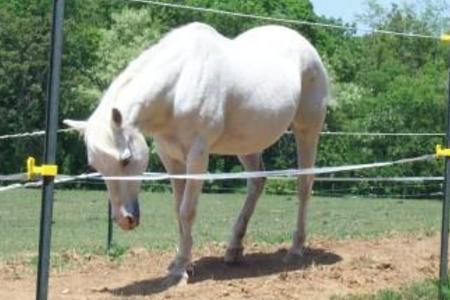 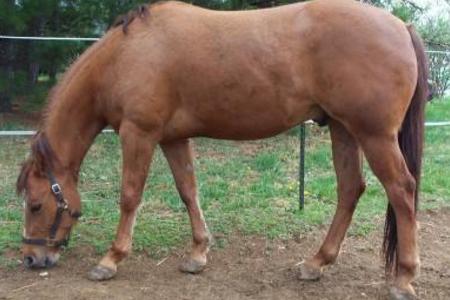 Lady Red
(20+ year old chestnut Quarter Horse mare)
Purchased to avoid going back to auction in 2003. Previous owners were given the wrong horse (her) that they purchased from an auction and were going to take her back to another auction before I got her. Found her a good home in 2005 with Nicole's MD therapeutic riding home. 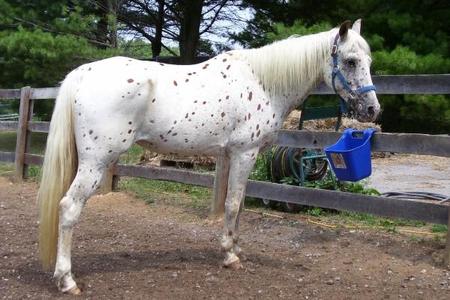 Freya VT
(1995 bay Oldenburg mare)
Purchased from Thurmont, MD horse auction October 5th, 2012. I outbid a dealer that is known to travel to New Holland auction, Freya was very overweight so would have easily fallen victim to the slaughter pipeline. Found her a good home November 2013 with Lauren in WV.
http://www.allbreedpedigree.com/freya56

Chips
(18+ year old Shetland-type pony gelding)
Purchased from a neglect situation in 2008. He was being kept in a 2-horse bumper pull trailer for at least two weeks straight before I got him... it was filled with mud, poo, and pigs on the pretense he wouldn't stay in the pasture and kept wandering onto their busy road. His feet were so horrible & long/curved & they didn't even have frogs!! Found him a good home in 2008 with Melissa in MD. 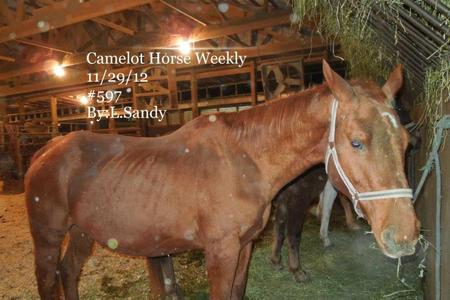 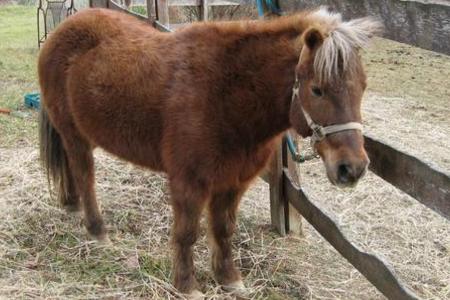 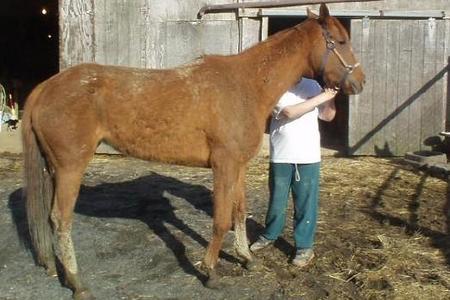 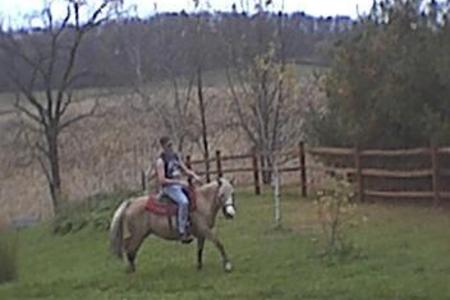 Sweetie
{19??-2013}
"Sweetie" was a  14.2 hand, unknown age, chestnut Quarter Horse type mare. I purchased her November 29th 2012 from Camelot Auction in NJ. She was very underweight (body score of 1.5/2), full of worms, and poor hooves... along with being pregnant. Miscarried her unborn foal in March 2013. She finally recovered from everything and went on to be my personal riding horse for the next couple of months. She sadly suffered a stroke in the pasture in summer 2013 and passed. She is greatly missed.

Justin
(18+ year old bay Standardbred gelding)
Purchased from AC4H rescue in 2004 alongside Sunshine. In 2005, he started having issues with getting up from laying down due to hip arthritis... I donated him to Traveller's Rest Equine Elders Sanctuary where their flat land allowed him further years of enjoyment. 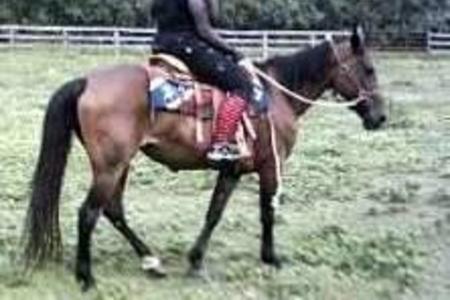 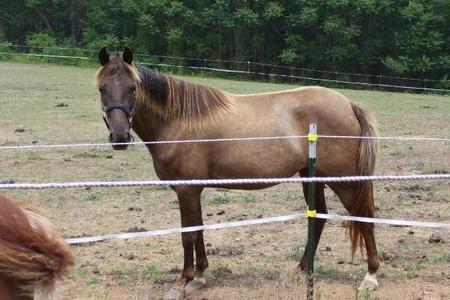 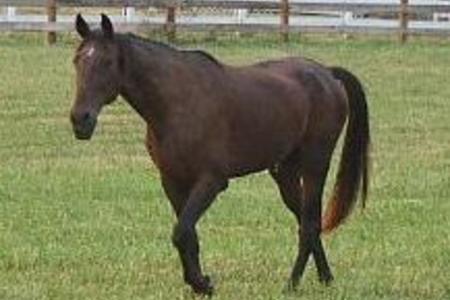 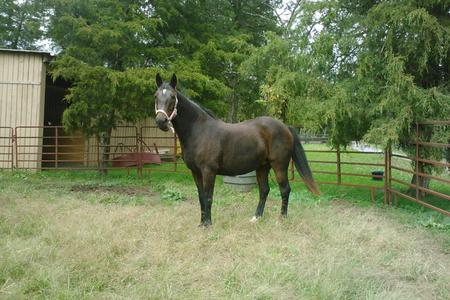 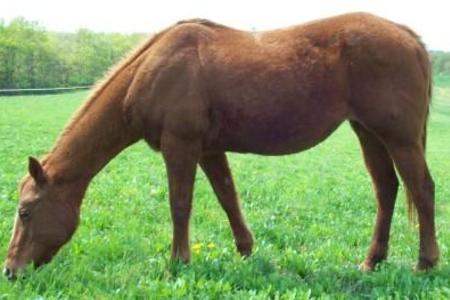 Whiskey
(18+ year old bay gaited mare)
Was a "freebie" or in other terms a owner surrender in 2004. Previous owner was unable to continue caring for her. I had fully intended on keeping her for life, but I gave her to another rescue in New Freedom, PA in 2005 when her hip could no longer handle my pasture's hills and couldn't bare the thought of putting her to sleep (as flat ground she had absolutely no trouble with at all). She was adopted to Gayle in PA - went to same home as Gail, Orion, & Sunshine.

Purchased to rehab in 2004 from a racetrack injury broken knee as previous owners didn't have time/room, but unfortunately I had to put her to sleep 30 days after as her knee was causing her too much pain. :-(

Sundance
(8+ year old chocolate Rocky Mountain-type gaited mare)
Purchased from Hagerstown, MD horse auction in 2007 along with Sandtrap. Found her a good home in 2008 (as was apparently 2-in-1 /bred before the auction) with Dee in MD.

Orion
(8+ year old chestnut Pinto gelding)
Was a "freebie" or in other terms a owner surrender in 2005. Previous owner no longer had room for him. Found him a good home in 2005 with Gayle in PA - went to same home as Gail, Sunshine, & Whiskey.

Gail
(15+ year old gray Quarab mare)
Was a "freebie" or in other terms a owner surrender in 2005. Previous owners were moving and unable to take Gail with them. Found her a good home in 2006 with Gayle in PA - went to same home as Orion, Sunshine, & Whiskey.

Mr Inspector Clu So
(1999 chestnut Quarter Horse gelding)
Was a "freebie" or in other terms a owner surrender in 2005. Previous owner couldn't handle his EPM issues. Found him a good home in 2005 with Belinda in MD.
http://www.allbreedpedigree.com/mr+inspector+clu+so